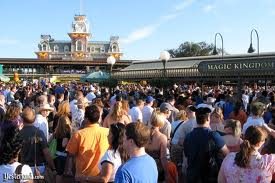 While big crowds in early April are to be expected, just how busy will it actually be in the World?

The folks at www.touringplans.com are anticipating crowds of 9 or 10 through April 12th. To give you some perspective, a level 10 at Disney Hollywood Studios typically means a 97-111 minute wait on Toy Story Midway Mania's stand-by line (yikes), and up to an 86 minute wait for a level 10 crowd in the Magic Kingdom at Space Mountain.

Disney's response to the anticipated crowds is somewhat unprecedented:

Throughout the first week of April, and likely beyond, the Animal Kingdom will be open on some nights  until 9 PM NOT including extra magic hours.  I have yet to see 9 PM closings for Animal Kingdom without the use of a three hour evening extra magic hour block.  With the general thought that Animal Kingdom is a half day park,  Disney is clearly trying to spread out the crowds to their least attended park to avoid the nightmares at DHS and MK (nightmare in my mind would be a 100 minute wait at Toy Story).

Not to be outdone, the Magic Kingdom will be open most nights until 1 AM, and as late as 3 AM including extra magic hours on April 11th.

I have yet to go to WDW when the crowds were anticipated to be this heavy.  What has been your experience with huge crowds? Did it ruin any part of your vacation experience?  Let us know in the comments below or by E-mail at show@mightymenofmouse.com