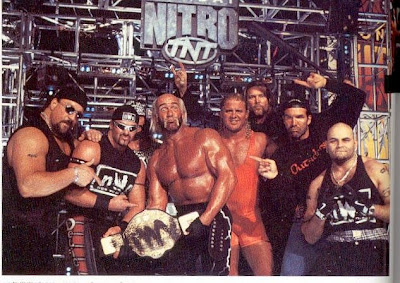 In honor of this weekend's upcoming Wrestlemania....

Few people remember that, Disney's MGM Studios used to play host to WCW.  WCW was an arch-competitor to WWF back in the 90s.  Live and taped events would occur at the Studios.  Monday Nitro, a live show, would broadcast at the entrance to the park.  Many key moments in wrestling history took place right where bags are now checked daily.  Highlights include the development of the NWO, which is pictured above.  You can even see some of the matches on the the Very Best of Monday Nitro DVD recently put out by the WWE.  As a huge wrestling and Disney mark, it was ambrosia.

It wasn't all big moments and great wrestling.  The Studios also hosted tapings of WCW's third and fourth run shows including WCW Worldwide and Saturday Night.  These tapings occured over where Toy Story Midway Mania now sits.  SPOILER ALERT:  Wrestling is fake.  These tapings would actually occur weeks/months before scheduled PPVs and there would be massive spoilers at these.  One show featured a wrestler by the name of Sid Vicious* sporting the Big Gold Belt weeks before he was to win it.  The kicker was that they ended up not giving it to him.

For reasons like that, it was a very touristy crowd.  I had the pleasure of getting in once.  The highlight of the show was Beautiful Bobby Eaton defeating a no name in about five minutes.  A bigger highlight was watching Hulk Hogan walk around with Kevin Nash (tall guy above) and Scott Hall (guy with the Don Johnson-esque facial hair).  This was only weeks before the Hulkster became a bad guy.  I practically crapped myself.  I only calmed down when I was able to purchase a Macho Man bandana and neon green Sting tee.

*Sid was called Sid Justice and Sycho Sid in the WWF.  He was certifiably insane.  He once stabbed another wrestler with a pair of scissors.  He also quit wrestling.....to focus on his softball team.  If you want to be grossed out on a Friday, google "sid breaking leg."  You're welcome.
Posted by Dutch Lombrowski at 2:59 PM