Dutch like Podcasts and talking to his Wife and Russ

I drove one of our cars down to Florida this past weekend.  I listened to 45 podcast episodes over the two days I spent on the road.  Several folks expressed interest in what I listened to, so I decided to share it here.  The spreadsheets with all the fund data are after the jump.

I listened to 2,810 minutes of podcasts from Sunday morning when I left Barrington, RI to when I landed in Warwick, RI on Wednesday morning.  That works out to 46 hours and 50 minutes.  About 2,550 minutes (42 hours and 30 minutes) of that was over the two day drive down.  I was able to do this thanks to Overcast, an iOS app that does some fun things with increasing audio playback speeds. In terms of "real time," I spent about 24+ hours listening.  Again, thanks Overcast!

The heroes of my road trip were Ben Lindbergh and Sam Miller of Effectively Wild.  I thoroughly enjoyed the 16 episodes of EW that I listned to for a total of 613 minutes.  The average length of an EW episode was 40 minutes.  The second most listened to pod was Reconcilable Differences with 384 minutes.  Amazingly, that was 3 episodes.  Hello Internet comes takes third place with 328 minutes in 3 episodes.  The shortest was an episode of the Disney Dish with Jim Hill about the Animal Kingdom was a lean 18 minutes.  Data is below the jump.

Since Matt Houser asked, my favorite three podcast episodes were Effectively Wild 913 (featuring Rany and Joe), Orlando Tourism Report 78 (an excellent interview with Ron Schneider about playing Dreamfinder), and Radio Westeros 25.  The only episode/show I wouldn't recommend would be CBS Fantasy Baseball Today.  It is very bad.

One final little note.  While figuring out my drive time, I checked my phone logs.  I spent about four hours on the phone. 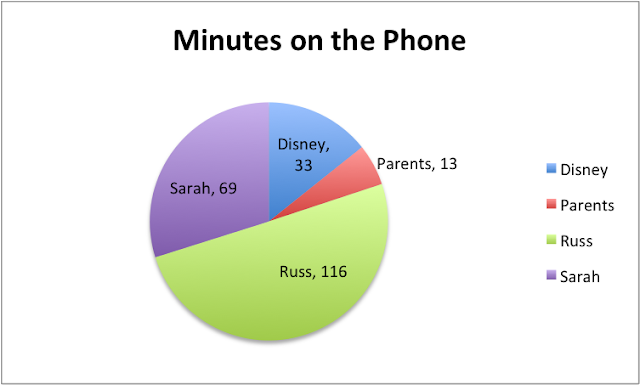 Posted by Dutch Lombrowski at 6:17 PM